Sarah Everard’s murder is far too close to comfort for so many women. Women have been conditioned to be hyper vigilant in public spaces with good reason. However, they should not have to bear this burden. Safer lives for women come with the deconstruction of patriarchy and misogyny.

Over the past couple of weeks, the abduction and murder of Sarah Everard has ignited concerns of violence against women, propelling it into public awareness. The incident has left women feeling vulnerable, fearful and angry, with a sense of ‘enough is enough’ as we reflect on the gender-based violence experienced by women every day.

Women have good reason to be fearful. A recent study by the APPG for UN Women reported that 97% of women between 18-24 have been sexually harassed and 71% of women of all ages have experienced some form of sexual harassment in public spaces in the UK. Furthermore, a woman is murdered every three days in the UK. There has also been insufficient support for women who have experienced gender-based violence with 45% of women thinking that reporting the incident wouldn’t help and 55% of women thinking the incident was not serious enough to report. Additionally, the pandemic has seen a spike in violence against women with an estimated increase of 20% since the outbreak of COVID-19. Therefore, there is a general feeling of unsafety among women in public and private spaces.

However, Ms. Everard’s murder has driven a change with women demanding that the responsibility should shift from being on women to the wider community. But why? What is it about this incident that has generate a retaliation from women, encouraging them to speak out about their experiences and to #reclaimthenight?

Ms. Everard represents the majority of young white women in the UK, resonating deeply with many. Her murder demonstrates to society that women’s hyper vigilance towards men in public spaces is not merely paranoia but a legitimate and necessary precaution. It is a story that is far too close to comfort for so many women as we have seen through the countless stories shared by the public. It highlights “the reality that misogyny, systemic male entitlement, and violence against women is thriving” and that it could happen to “any women, anywhere, at any time”.

Women are regularly advised and expected to be hyper vigilant and take extra precautions in public to avoid gender-based violence (including wearing less revealing clothing, taking different routes home, not walking alone at night, etc.). Nevertheless, women are still attacked, and often blamed and held accountable for inciting their attackers in some way due to rape culture and misogyny which continuously justifies violence against women. In many cases the police, courts and juries perceive the victim as having some form of responsibility for sexual and violent crimes committed against them or do not believe victims. In the US, until 1975, California juries were instructed to “examine the testimony of the female person named in the information with caution”. And, let’s not forget the case of Marie Alder, in which the police forced her to retract her report of rape as they didn’t believe her.

Ms. Everard’s murder has spearheaded women’s intolerance of bearing the brunt of constantly having to protect themselves against men and being held accountable for their attackers. Across the globe, women are tired, frustrated and angry of constantly encountering sexual abuse and harassment and being alone in the fight against it. They are exhausted from not having their issues taken seriously and for insignificant efforts being made to abolish violence towards them merely for being women.
Although there has been a surge in awareness of gender-based violence following the death of Ms. Everard, with women sharing their stories, men being engaged in discussions and changing behaviours, and a push for the government to ensure the UK is safer for women, this is not enough. There is an urgent need to abolish deep-rooted social norms and the patriarchal structure which ties gender and violence together. By deconstructing gender norms, dismantling misogyny and promoting equality in all walks of life, the relationship between violence, power and men will deteriorate and gender-based abuse will decline. It is not enough to merely listen and discuss. We need action. And we demand it now. 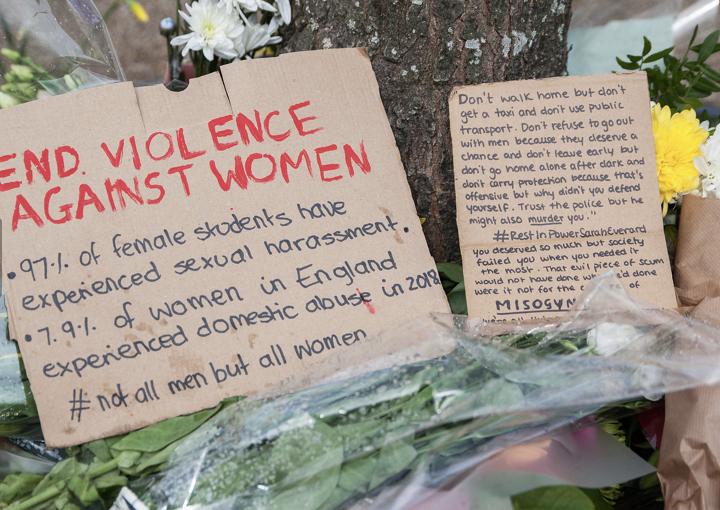